The Hero in You Mural

The Hero in You Mural

Downtown Salutes Those Who MKE A Difference

Watch the Video to Learn About the Project

In the summer of 2020, Milwaukee Downtown, BID #21, the Downtown Placemaking Task Force, and the City of Milwaukee's Department of Public Works commissioned Milwaukee artist Ken Brown for a new mural on the MacArthur Square parking structure, located at 841 N. James Lovell Street. Spanning 620 feet wide and six feet in height, the mural celebrates the city's essential workers and frontline heroes during the COVID-19 pandemic, including healthcare workers, teachers, and grocery store workers. Brown integrates essential workers, flowers, and symbols into a mosaic-inspired mural titled "The Hero in You."

The mural draws attention to one of the city's most prominent, but overlooked, civic spaces, anchored by the Milwaukee County Courthouse, Milwaukee Public Museum, and Milwaukee Police Department headquarters. The mural is part of a larger, ongoing project to restore the MacArthur Square parking structure and green space. In 2019, the parking structure received upgrades, including a repaired facade, new railings, and new signage.

"The Hero in You," and the essential workers who inspired the mural debuted in the Milwaukee Strong music video during a virtual release on Friday, July 24, 2020. Appropriately proclaimed "Milwaukee Strong Day" by Mayor Tom Barrett, the project packaged the mural, essential workers, and over 30 local musicians into an epic summer anthem. The original song, written by Shonn Hinton, with lyrics by Shonn Hinton and Ray Nitti, and assistant produced by B~Free, was brought to life in a star-studded music video featuring over 30 local musicians, dubbed The Milwaukee All-Stars.

The song's overarching message is one of hope and togetherness in the face of uncertainty. The mural and song encourage the city to remain united as it experiences the ongoing challenges of the pandemic and social unrest. The project brought together Imagine MKE, 88Nine Radio Milwaukee, the Milwaukee Arts Board, and Milwaukee Downtown, BID #21 in a first-of-its-kind partnership. Starting in August, Milwaukee Strong was the soundtrack for Milwaukee Downtown's MKE It Back television and radio campaign.

Contributions include a string quartet of Milwaukee Symphony Orchestra musicians, a trio of student musicians that participated in 88Nine's Grace Weber’s Music Lab, a vocal quartet of harmonies from band Ruth B8r Ginsburg, favorite Milwaukee duos SistaStrings and REYNA, and much more. 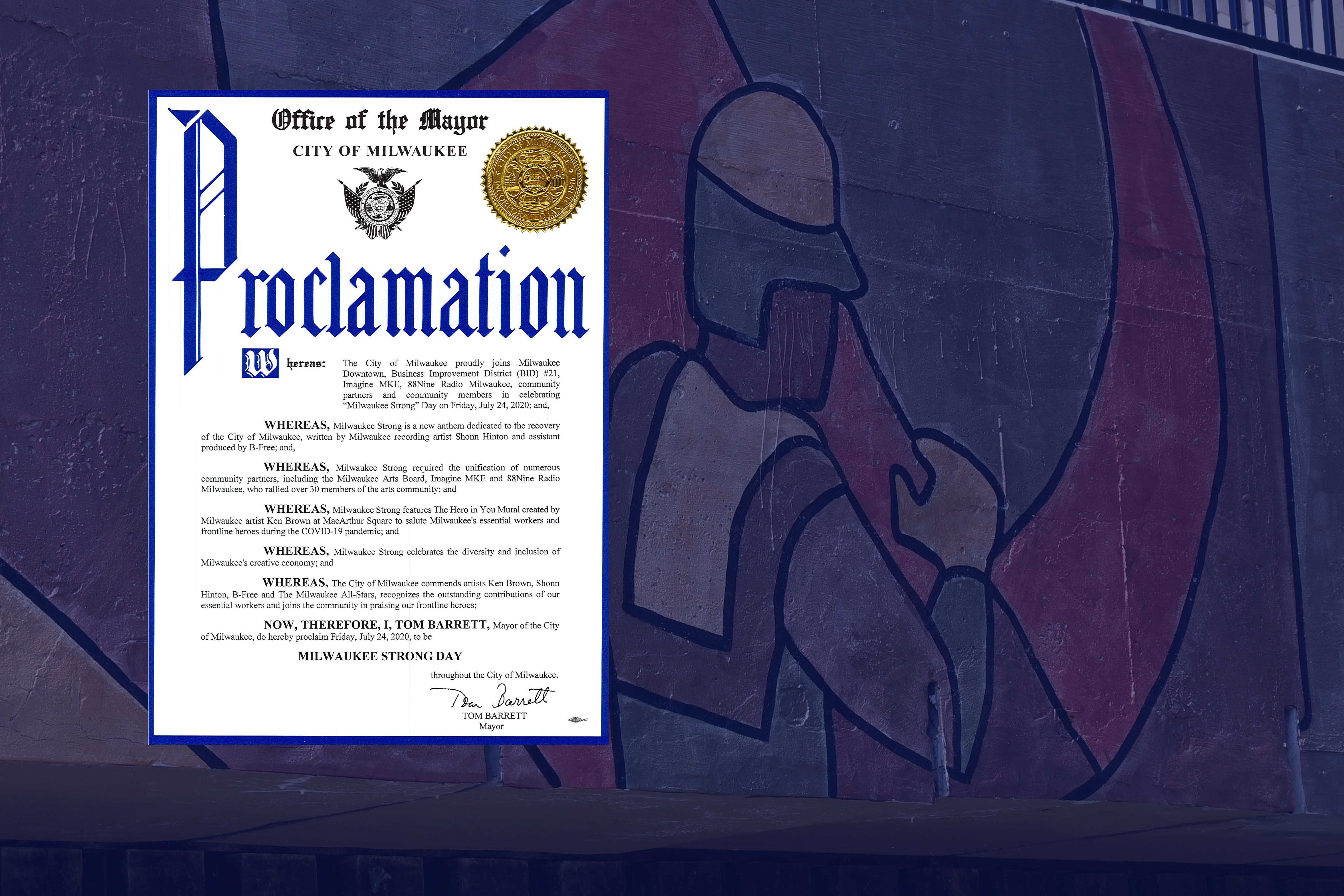 Meet those Who MKE A Difference

Beth Lappen is the Downtown Homeless Outreach Coordinator with the Milwaukee County Housing Division’s Outreach Services Team. Beth has continued to work hard to protect the people she and her partners in the community serve. What she does every day hasn’t changed, but how she does it has changed considerably. Beth, and all of her community partners, maintain a six-foot distance, wear masks and gloves, take their temperatures daily, and do an honest check-in of how they’re feeling.

Willie Nash has been a bus driver with Milwaukee County Transit System (MCTS) for 19 years. In the past, she has purchased meals and helped passengers who are in need. Today, and in recent months, work for Willie looks a little different. They equip buses with sanitizing wipes, hand sanitizers, and disinfectants for the operators to use. When Willie isn’t at work, she’s staying home with her husband, which means she gets more time to do things she loves, like cooking, home improvement projects, and watching TV, giving her a positive outlook.

Officer Carlos Felix with the Milwaukee Police Department is the District #1 Community Liaison, which includes the central business district. Officers still respond to all calls for service and have to enter the unknown every day, but they try to take preventive measures by limiting personal contact when possible and masking up. At home, Carlos’s daughter is living with her grandmother since he and his wife work with the general public. They communicate with one other daily, but it doesn’t feel the same coming home and not having a daughter there to greet him.

When Canary Coffee Bar opened in late August of 2019, the last thing Colin and Emily Whitcomb expected was a pandemic to slow their business. At the beginning of March, they were making record sales with a team of four to support them. Now, Colin works six days a week by himself. Canary Coffee has had to learn and adapt to this new way of living. They launched online orders, text orders, and call-in orders, and even added safely spaced bistro tables and chairs outside, anything to try to deliver a much-needed cup of coffee while protecting their guest’s safety.

Downtown properties are working hard to continue their services for their clients, and 310W is no exception. Kim Guerrero is the senior general manager at 310W, and her life is looking quite different now. The building management team at 310W worked hard to try and stay ahead of the curve by placing extra sanitizing stations in high impact areas, securing building access points earlier, and reopening them later in the morning. All of these preventive measures help keep the public from coming into the building earlier than necessary and keeps the staff onsite safe.

Bryan Boyce is the general manager at Zarletti and had to pivot his team to continue serving customers during the COVID-19 pandemic. Bryan knew Zarletti would have to change how it operated. For Bryan, this shift began with revising the restaurant’s function. “We’ve drastically changed our entire business model,” Bryan states, “We pivoted on March 16th from a fine dining restaurant, catering to locals, business travelers and people from all over the world, to a curbside delivery restaurant.” To get through each day, Bryan emphasizes communication and taking breaks with his significant other who works in healthcare. He also highlights how important it is to stay engaged and organized. “Making a schedule for our day to day over morning coffee has helped, along with planning for the future and spending virtual time with friends and family,” Bryan shares.

Lucas Ribbink, the Maintenance Coordinator at the Milwaukee Public Market, has witnessed meaningful growth during his years at work. For almost a decade, Lucas has watched the Milwaukee Public Market rise in popularity to become an admired staple in the community. But with the spread of COVID-19, the Milwaukee Public Market had to temporarily close its doors before reopening for curbside service and now limited indoor service. Even with this major change, Lucas found a silver lining. He realized the absence of people allowed him to devote more time to maintenance projects. For Lucas, this means the Market will function better than ever when crowds finally return. He proudly states, “We’re working to make sure the Market is a safe and welcoming place once we reopen fully.”

Learn more about Lucas and the Milwaukee Public Market here.

Along with sanitation services like waste collection, the Department of Public Works crew manages a variety of other amenities for residents. Whether it is street lighting or running water, the department handles it all. With this crew of behind-the-scenes heroes keeping the city functioning, Milwaukee can rest easy. Even with these additional protocols, DPW still faces challenges: “We know that while we do everything to keep the risk low, leaving home now carries some risk. We come home to challenges that so many others are going through with partners and children remaining at home while we need to continue to serve the City.”

Learn more about the City of Milwaukee's DPW crew here.

No matter what changes come his way, Metro Market Store Director Anthony Kuchinsky keeps customer and employee safety a top priority. Like many other business leaders, Anthony quickly adapted his store to the reality of COVID-19, identifying the crucial role that his grocery store plays in the community. For Anthony, this meant new safety measures and good communication with the store's team. "We are doing everything we can to keep our team here safe while ensuring the store is refilled and ready for our customers each day," explains Anthony. Anthony's respect for strong communication is what has helped him maintain crucial connections with his suppliers. These connections ensure Metro Market has products available for customers who need them.

Graphite, a Breakaway Couriers staff member, is working hard amidst the COVID-19 pandemic. As a courier for an on-demand delivery company, Graphite is part of a dedicated team that provides essential transport of goods. Although Breakaway has implemented new safety measures, Graphite admits business has been slower. Still, Graphite does what he can to keep life exciting. At home, Graphite devotes additional time to develop his passions. When asked what phrase gets him through work each day, Graphite has this famous quote to share: "Keep on keepin' on."