Avenue of the Arts

To cultivate culture and community, the Downtown Placemaking Task Force was established in 2017 to oversee a series of special projects that enhance downtown's "third spaces," through public art and programming.

Since 2017, Ramirez continues to transform the city's built environment with his signature style known around the globe. The project has even inspired the creation of a citywide utility box mural program.

"City of the Arts" 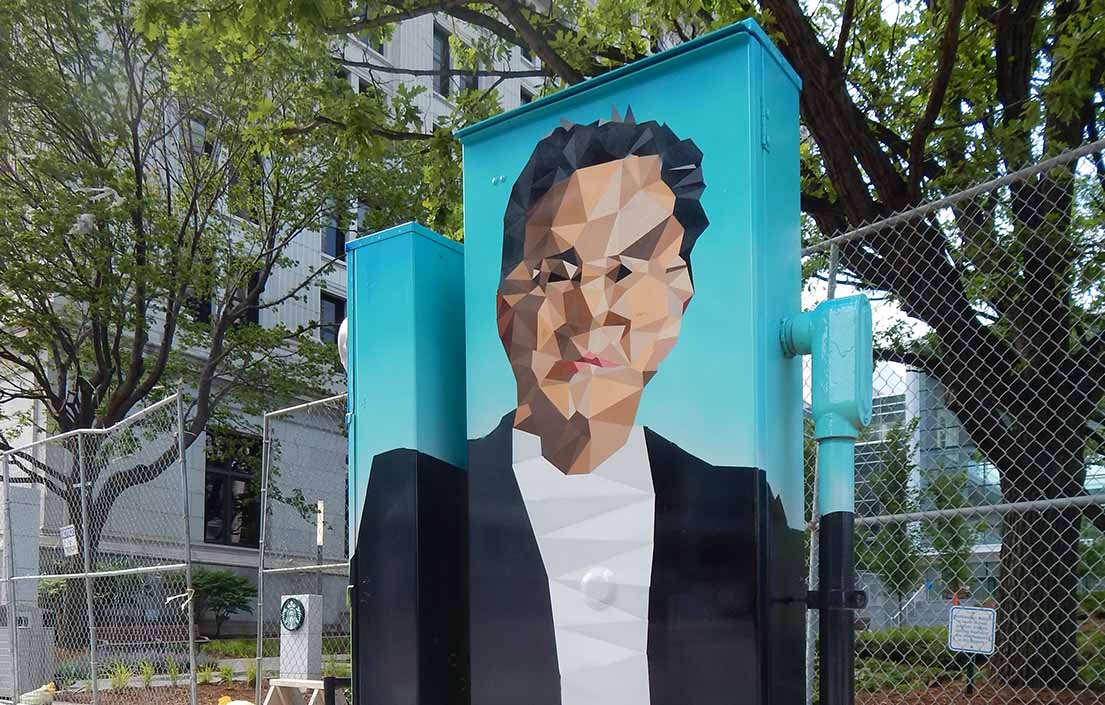 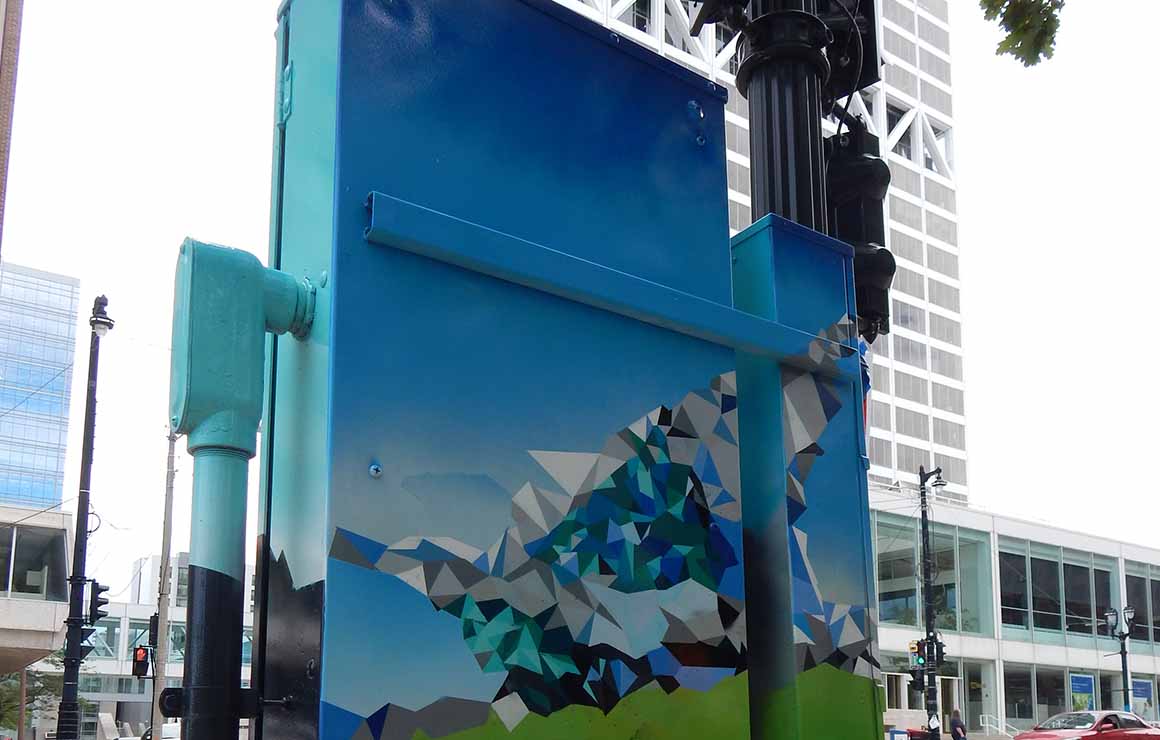 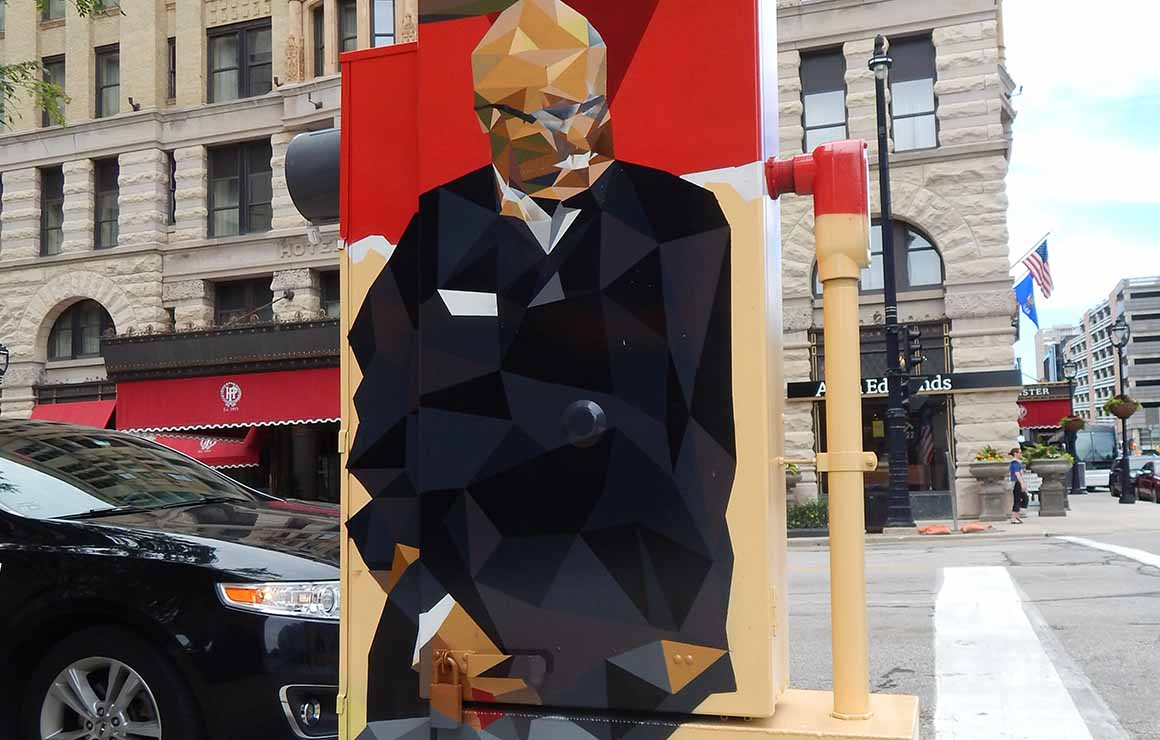 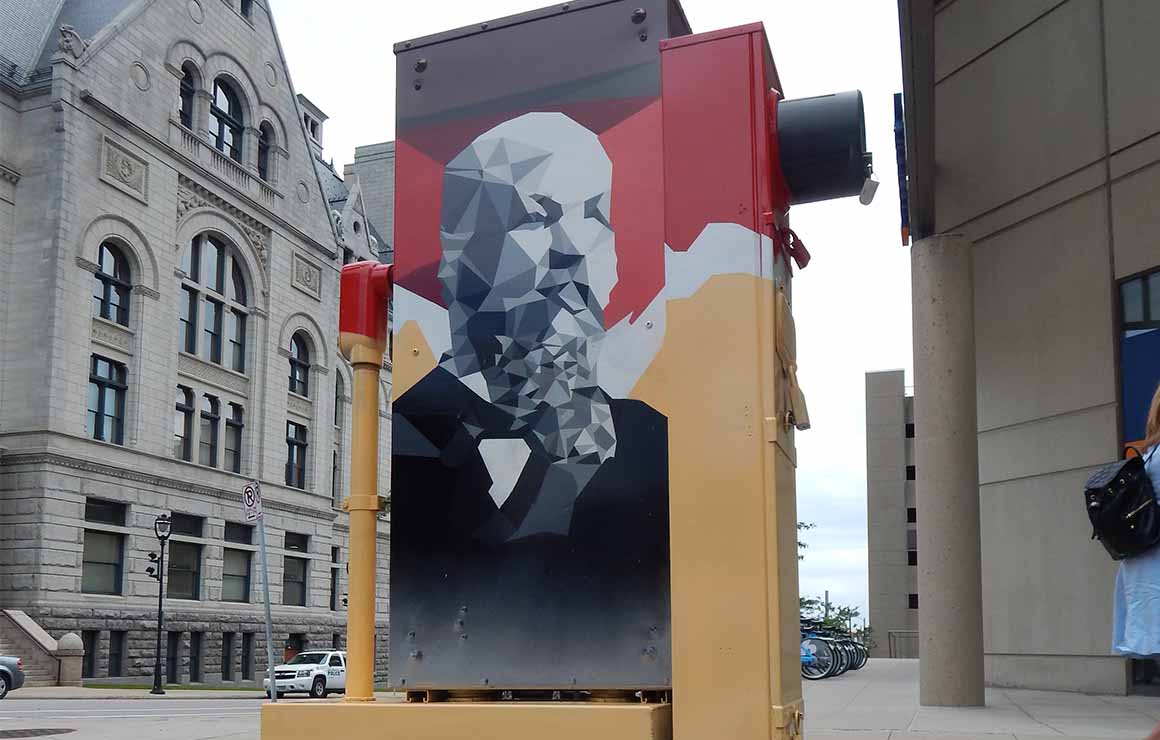 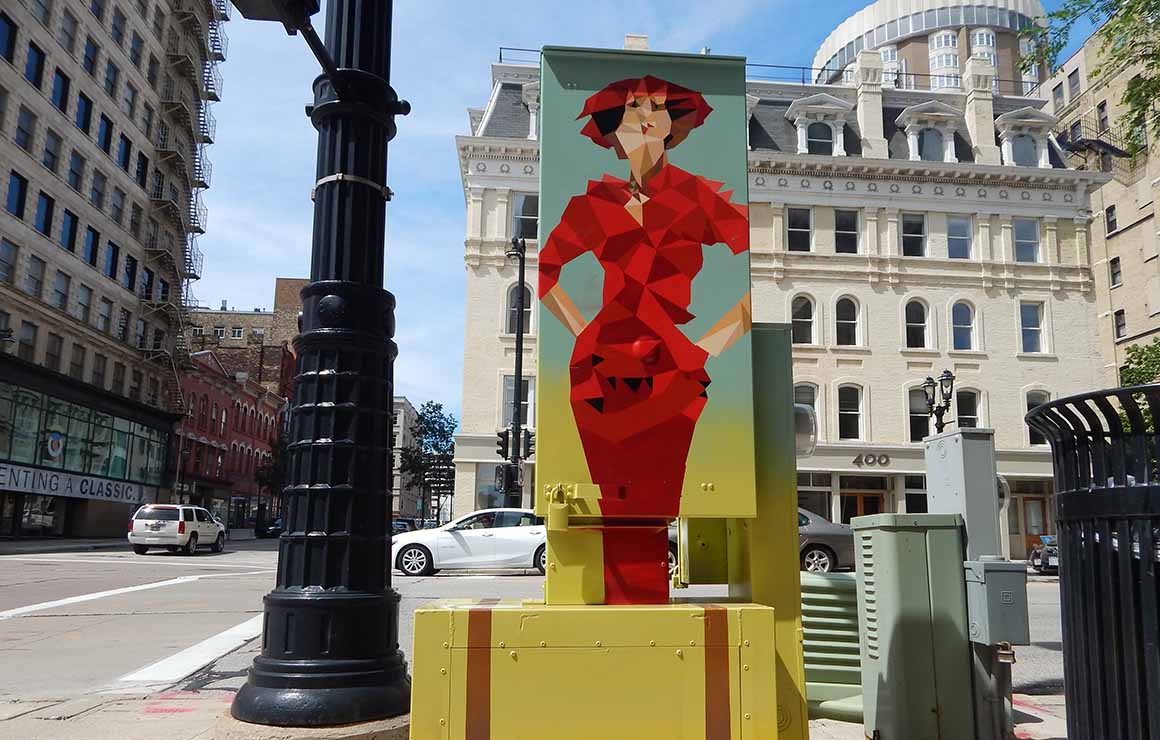 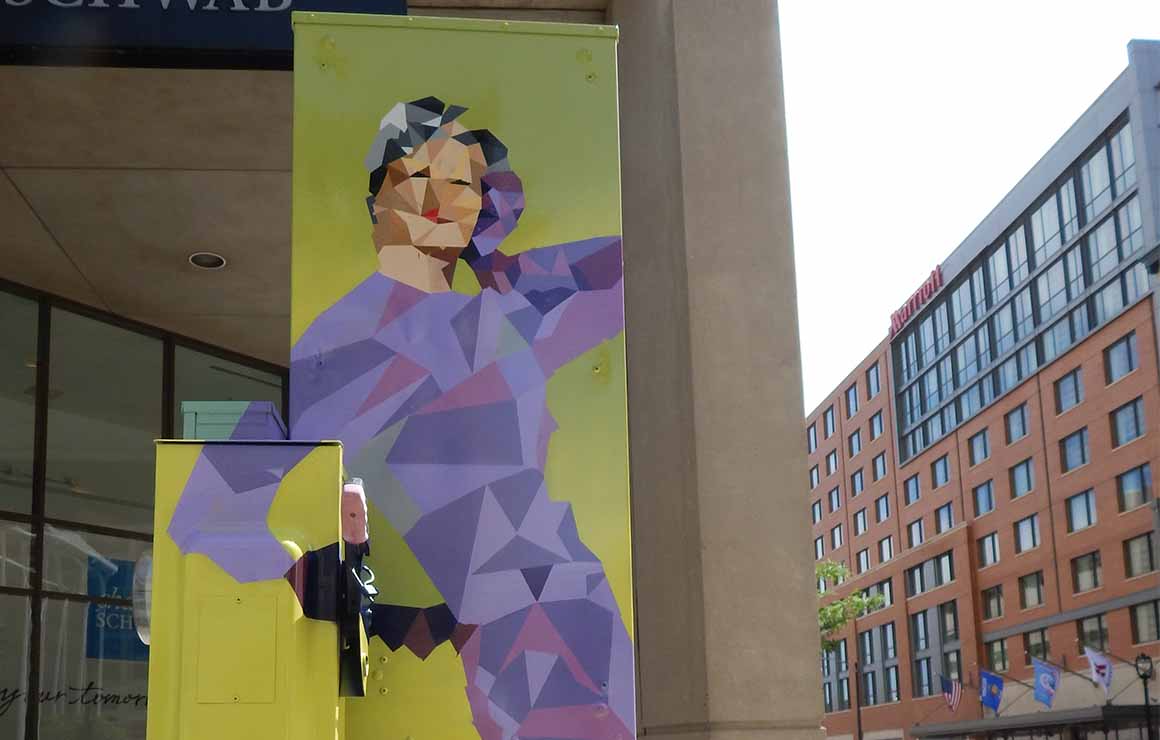 Harkening back to the days of Wisconsin Avenue’s prominent department store offerings, this mural depicts fashion commonly seen on the Avenue in the mid-century era. Home to Boston Store and Bon-Ton corporate offices today, Wisconsin Avenue once boasted the region's largest selection of department stores including Chapman’s, Espenhain’s, Gimbel’s, and later Marshall Field’s.

In the late 19th century, fierce competition between Juneautown (east of the river) and Kilbourntown (west of the river) resulted in a complicated matrix of shipping yards and streets. When the first bridge was constructed in 1842, the sides disputed further, and arguments escalated into the infamous Bridge War of 1845. Depicted in this mural, Milwaukee's founding fathers Solomon Juneau (sidewalk-facing) and Byron Kilbourn (street-facing) are divided by the Milwaukee River. 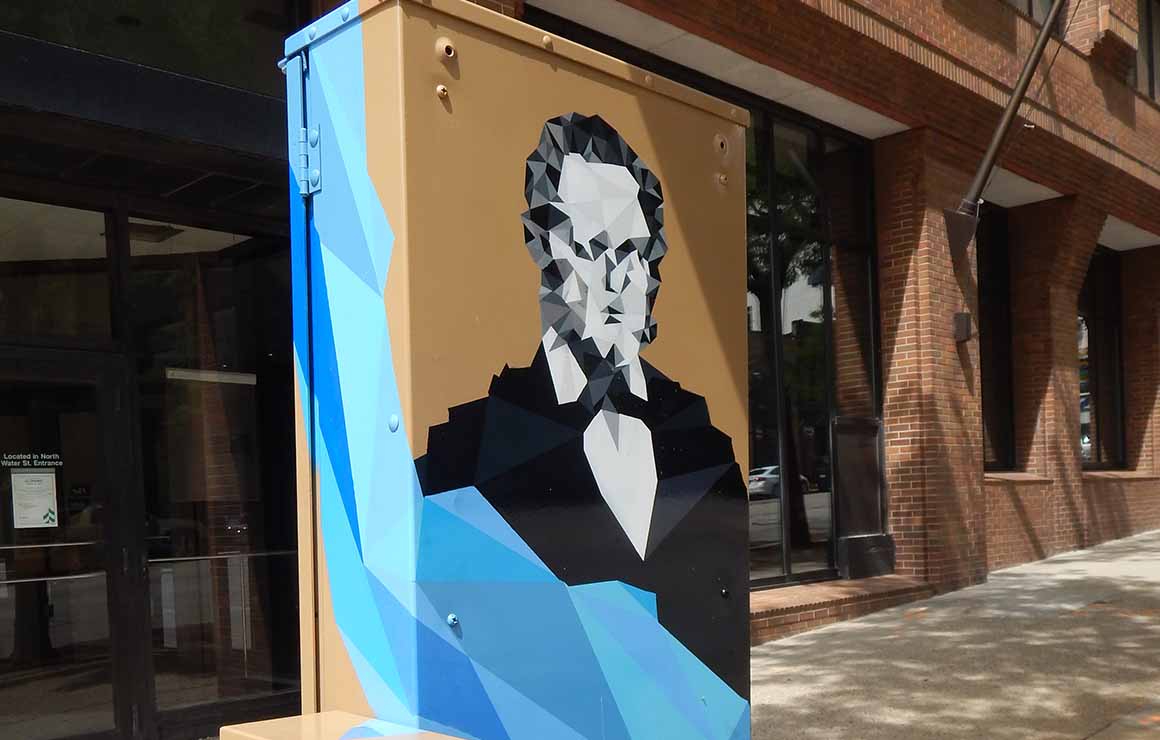 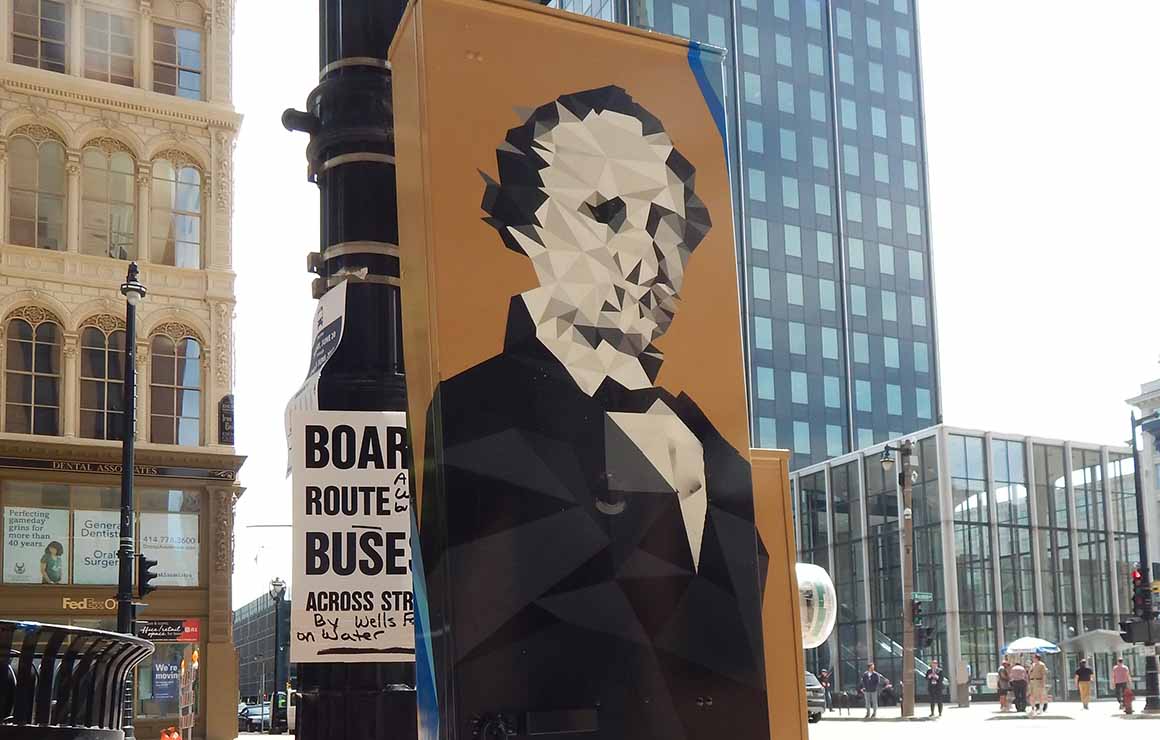 Once home to a robust indigenous population, including the Menominee, Potawatomi, Ojibwe and Ho-Chunk tribes, approximately seven villages were located within two miles of Milwaukee's present downtown. Although speculation continues around the meaning of the city's name, most historians believe Milwaukee derives its name from the Algonquian term meaning “good land.” Other interpretations include "gathering place" and "wet land."

Once home to the popular Great Circus Parade between 1963 and 2009, and the City of Festivals parade between 1983 and 1993, Wisconsin Avenue continues to host some of the region’s largest parades and spectacles. Each year, millions of visitors are drawn to the Avenue to enjoy the annual St. Patrick’s Day Parade, Memorial Day Parade, Veterans Day Parade, Sculpture Milwaukee and the NEWaukee Night Markets. The sidewalk-facing mural depicts the late Charlotte Rae, known for her role in NBC's The Facts of Life and a Milwaukee native. 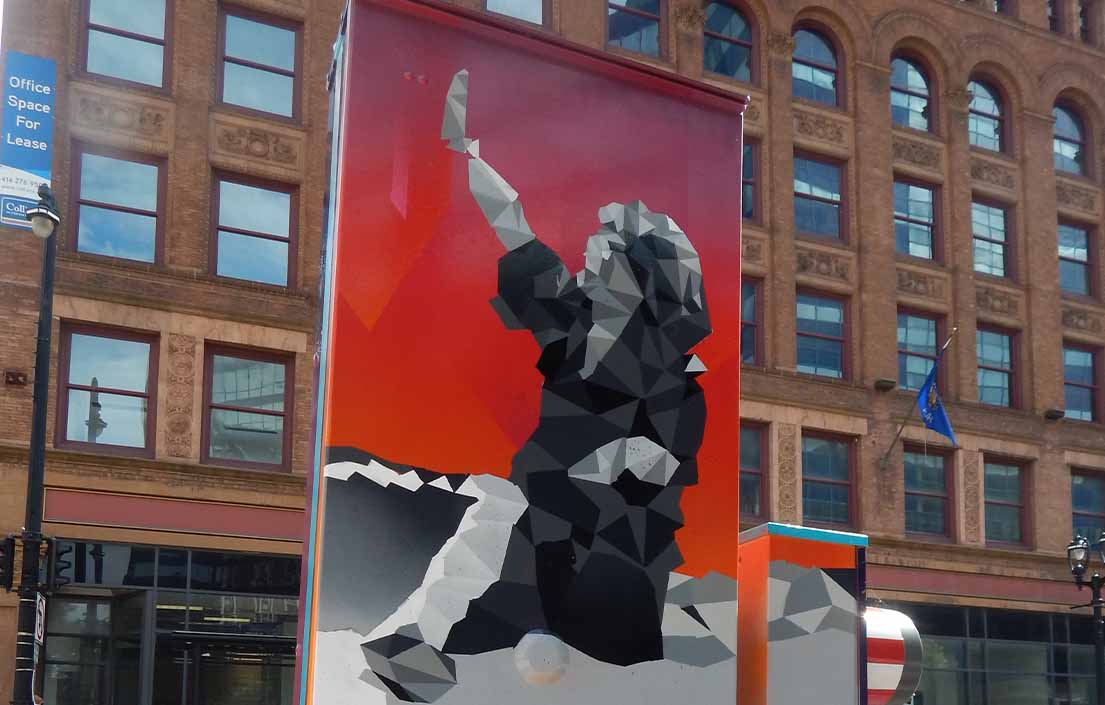 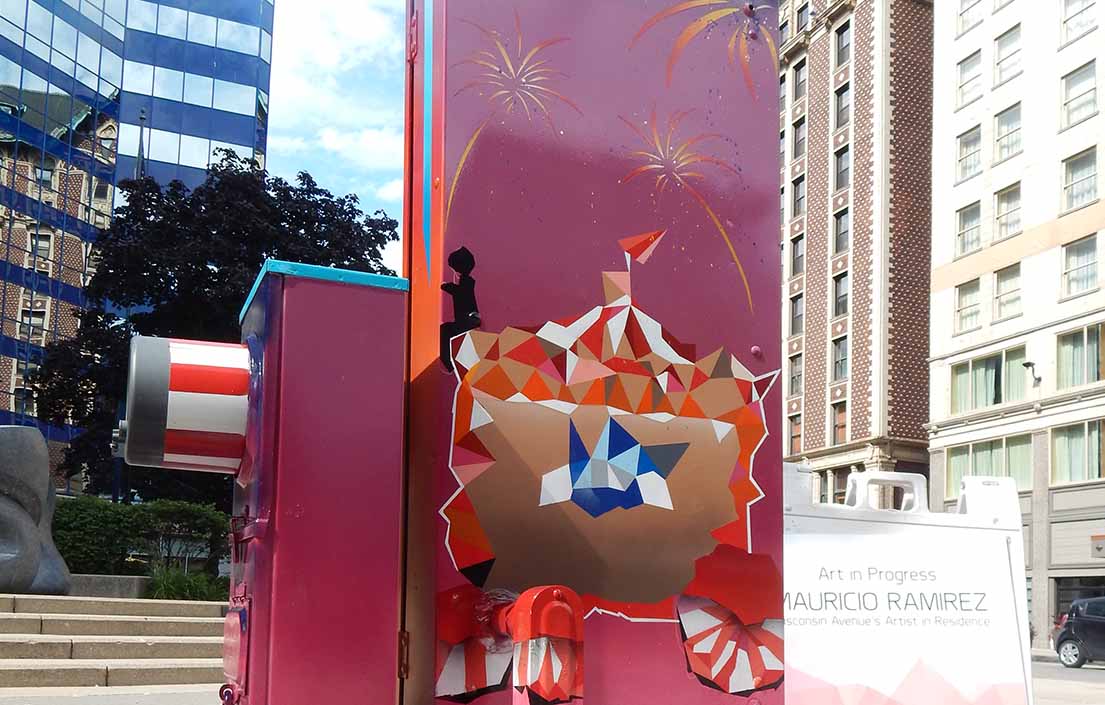 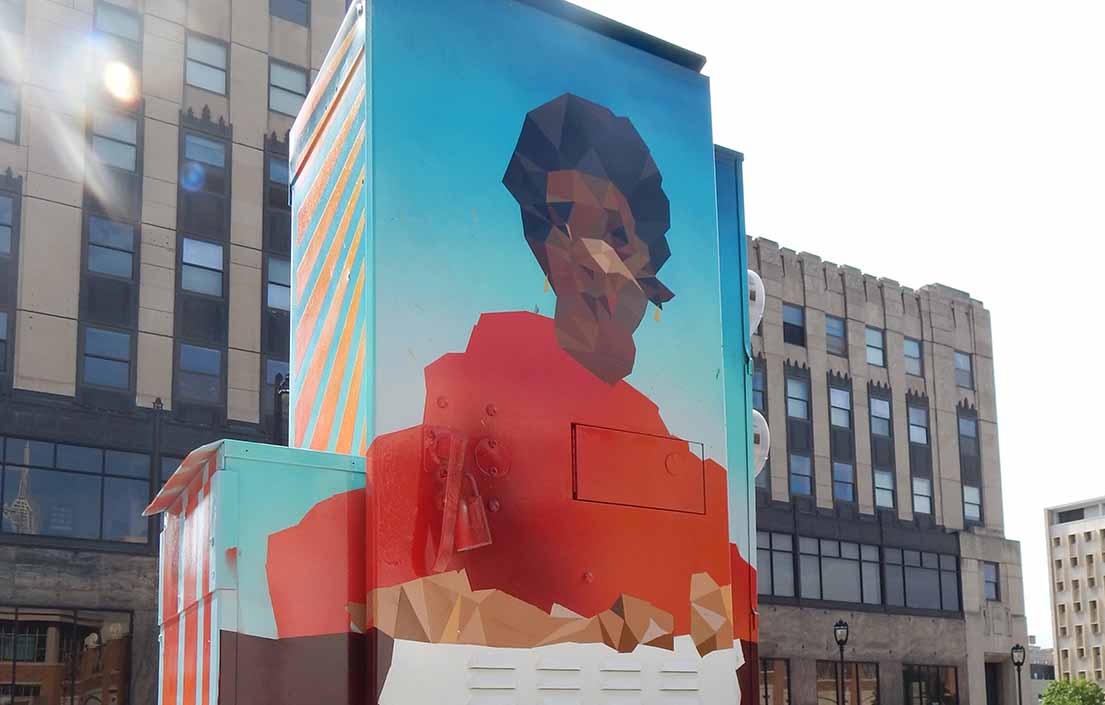 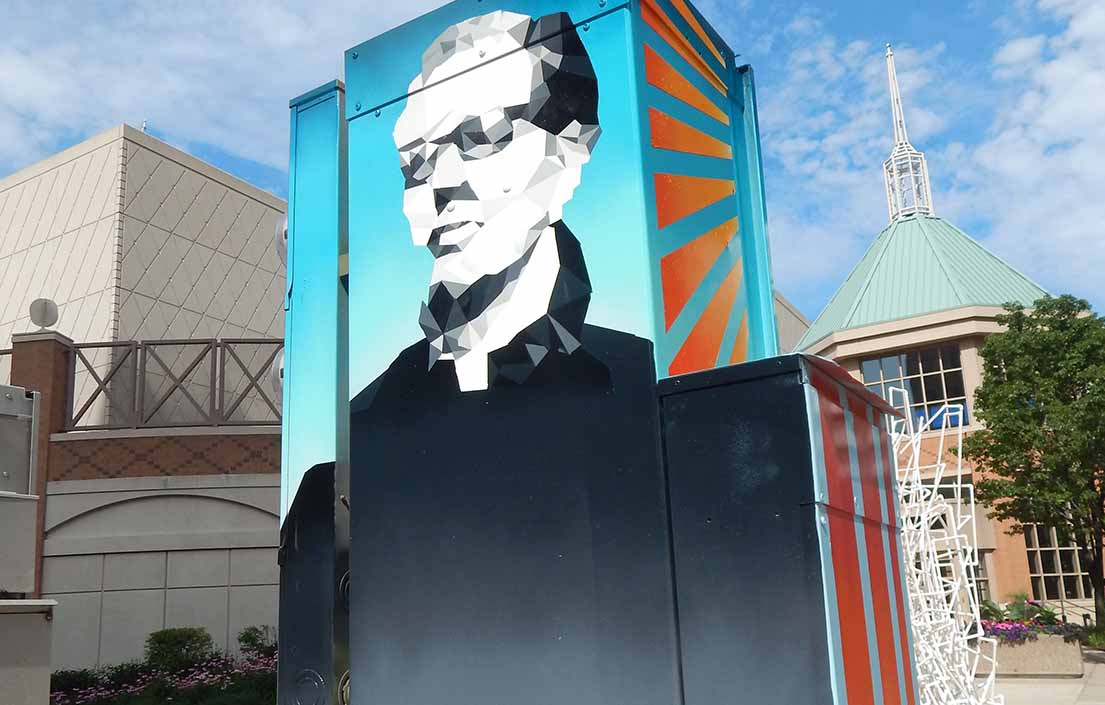 Sponsored by The Wisconsin Center District

Reflecting on Milwaukee's rich history and role in the Civil Rights Movement, this mural features two Milwaukee trailblazers. In 1956, Vel Phillips (sidewalk-facing) was the first woman and African-American to serve on the Milwaukee Common Council. With support from Milwaukee activist Father James Groppi (street-facing), Phillips passed her groundbreaking Fair Housing Law in 1968, after nearly six years of garnering support. In 1979, Phillips became the first woman elected as Wisconsin's Secretary of State.

Sponsored by The Wisconsin Club

Considered Marquette University's greatest coaches of all time, Al McGuire led the school's unrivaled basketball team to 11 consecutive winning season winnings. Between 1964 and 1977, McGuire shattered records with a final 259-80 win-loss tally over the course of his 13-year reign. McGuire's legacy lives on with Marquette University's Al McGuire Center and the annual Briggs and Al's Run and Walk fundraiser for Children's Hospital of Wisconsin. He was inducted into the Naismith Basketball Hall of Fame in 1992. 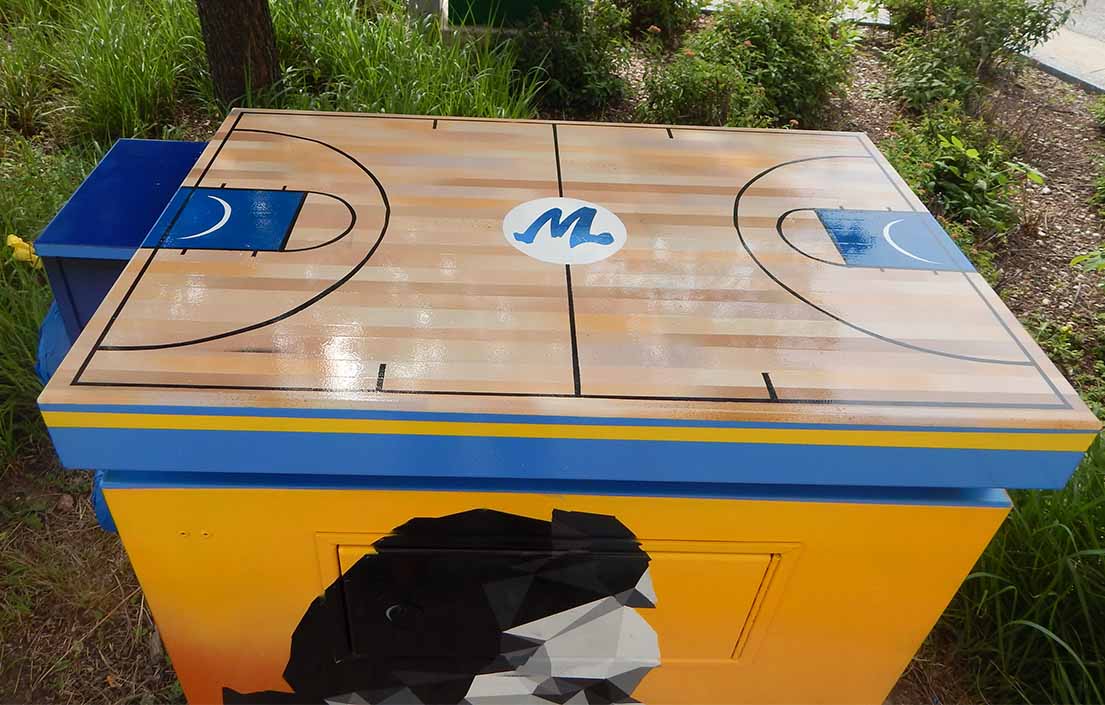 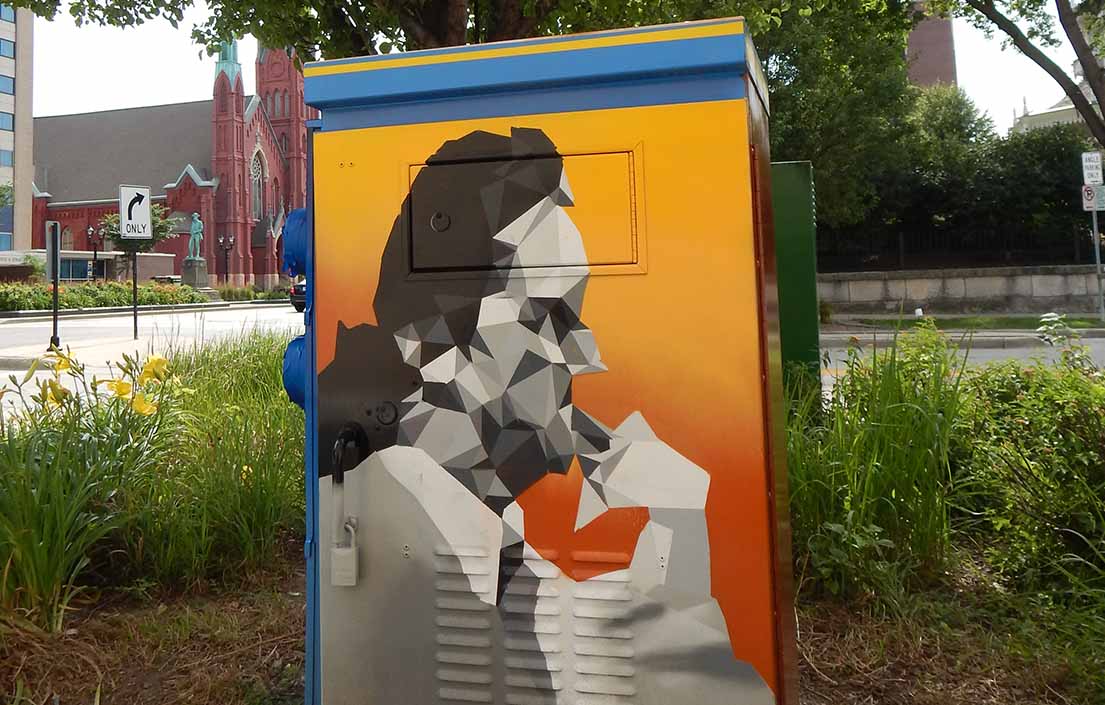